skip to main | skip to sidebar

Happy Easter Monday! Thank you so much for your patience. Shanna and I have finally decided on the winner of the HOW TO BE movie review contest. We are both in total agreement that the review written by Sabrina Beaufort-Langridge (QLD) is our favourite. The runner ups for this contest are : Melissa Cane (NSW) and Jocelyn Bateson (QLD).

Thank you so much for everyone who has participated in this contest. The winners should receive their prizes either sometime this week, or next week (at the latest).


Here is Sabrina's film review. I hope you can all see why we picked her as the winner.

HOW TO BE Film Review, written by Sabrina Beaufort-Langridge:

If youʼve reached the age of twenty-five, chances are you have experienced
your quarter-life crisis, and if you successfully navigated yourself through the
post-teenage wasteland of emptiness and despair due to a lack of purpose,
then you will identify with How To Be. If you havenʼt, you will still enjoy this
independent British film written and directed by first-timer Oliver Irving,
starring Robert Pattinson.

Pattinson has recently made a name for himself as an actor in major
Hollywood fantasy films, but in How to Be, he takes on the role of a character
entrenched in reality, playing the twenty-something Art, a man living with the
undigested pain of his childhood.

After being dumped by his brutally honest ex, Jessica (Alisa Arnah), he moves
back into his parentʼs home where, despite his best efforts, the bonds of
family just arenʼt there. As we become further aware of Art and his existence,
we learn he is a lowly super-market employee and aspiring musician who
volunteers at an adult respite centre in his spare time. He ponders and
questions and tries to connect, without great success turning to the only
constants in life, agoraphobic friend, Ronnie played by the scene stealing
Johnny White and high school mate Nikki Fierce (Mike Pearce) for help.
The relationship shared by the three does little to assist Art on his journey to
self-actualization, but does provide the majority of humor for the film. In his
bid to find that elusive thing called “happiness”, Art decides to take matters
into his own hands and hires a personal therapist, Dr. Levi Ellington, (Powell
Jones), to trail around after him and sort through his issues and become the
fully-functioning member of society his parents wish him to be.

As Pattinson wanders around London, in his too short gray trousers -
characterising a man who is forced to take care of himself, but doesnʼt quite
know exactly how - he proves he is an actor of range and ability, a Johnny
Depp for "Generation Me". And first time feature director, Irving shows a keen
eye for relationship-based narratives and does remarkably well coaxing a
performance out of his cast that is both heartrending and amusing.
The most impressive aspect of Art is despite seeming hopeless and
misdirected, he is, as the film moves on, determined not to give up, and in a
film that could easily run with clichés, instead it decides to move in the
opposite direction and it is this, that provides the humor that completely
balances this film.

This film may not appeal to hard-core Pattinson fans due to the nature of the
narrative, but it is a tender story of a hopeless man who doesnʼt give up hope,
and in this reviewerʼs opinion, How to Be begs for a second screening. 5
stars.
Posted by Umenohana123 at 11:12 AM 35 comments:

To everyone who has submitted their reviews, thank you very much. We are glad and surprised that so many of you have taken the time to write the reviews, and I must say that I've read some very good ones. Due to the large number of reviews we have to read, we hope that you would be patient and give us some time to ensure that we are judging them properly.

Despite all of that, we are aiming to announce the winners on this blog, by the end of this week. Once again, thank you so much for submitting your reviews.

How To Be Screening Organisers
Posted by Umenohana123 at 12:05 PM 2 comments:

How To Be Movie Review Contest

Dear Friends of How To Be,

Now that you've watched the movie, get your thoughts out and stand a chance to win an autographed How To Be movie poster by Rob Pattinson by entering your review into this contest!

Rules
1. Review must be between 250 - 500 words in a pdf format.
2. Please put in your personal contact details including: name, email address, home address, and phone number at the bottom of your review.
3. Email your review to howtobeau@gmail.com with the Subject: HTB Movie Review
4. Deadline is Sunday, April 5 2009.
5. Reviews that are not following the above rules will be disqualified.

Runner Ups (2 persons)
Each person will get 3 official How To Be movie posters.
Posted by Shann at 11:10 AM 3 comments:

Dear Friends of How To Be,

Thank you so much for showing up and giving us your support!
You were all very good audience! It was very nice to hear the frequent laughter coming out of the screening hall :) We felt that hard work paid off. Well, we're going off to celebrate now :) We hope that you guys enjoyed the movie and got home safely.

Details on the How To Be Movie Review Contest will be posted on Monday.

Again, thanks so much for the support and we wish you all the best,

How To Be Australian Screening Organisers
Posted by Shann at 11:19 PM 11 comments:

I'm sorry for leaving it this late, but we have been going through our options and it just doesn't seem realistic to organise an extra-day for Ticket Exchange. We weren't able to find a place, time or date that is suitable, and at the moment, the tickets are not with me yet.

If all of you can come at around 6 pm (or even earlier) on the screening day, this would help ensure that everyone is seated before 7 pm. There are a few of you who have mentioned that you'd like to help us during the day, and we really appreciate that. On the day, we will have more than enough people to make sure that the ticket exchange will run smoothly and efficiently.

Please bring your e-cons with you, and some form of picture ID (just in case it's needed). We will have a list of all your names with us...so hopefully, there won't be any confusion or delays.

Thank you and looking forward to see all of you soon,
How To Be Screening Organisers
Posted by Umenohana123 at 12:26 PM 8 comments:

Last chance to see HOW TO BE in Sydney!

Brunetti Cafe in Melbourne is offering 4 free tickets to the HOW TO BE Sydney Screening for 2 lucky winners! If you would like to find out how to win these tickets, please click here.
Posted by Umenohana123 at 2:08 PM No comments: 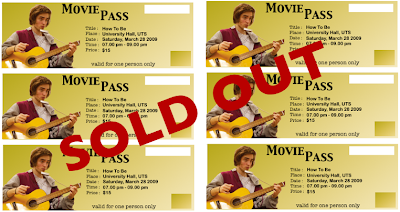 We're sorry to inform you that there are no more tickets left for the Sydney 'HOW TO BE' screening. Any ticket purchases after this moment will be refunded.

Thank you for your overwhelming support and enthusiasm for this movie. It might be a small movie, but it has a huge heart...and we are very very proud at how far this film has gone.

We hope that you'll enjoy it as much as we do!

See you at the screening, and thank you very much for all your support.

Regards,
How To Be Screening Organisers.
Posted by Shann at 3:32 PM 12 comments:

Which of the payment options below will you be more likely to choose from?

How To Be Trailer from How To Be on Vimeo.